Creative community colliders and a new word for collaboration

Have you ever felt you are lacking the words to describe what you do as a professional? Throughout history, new scientific and technical developments, social trends, political changes and more have all needed new terms and definitions so that we can communicate about them.

Computers needed software programmers, social media analysts would not exist without Twitter and Facebook, and YouTube and Twitch created new professions for online streaming. In fact, many of the jobs that we do today, simply did not exist 20 years ago. Or at least did not have the name they have now. No doubt, there have been people designing user-experiences throughout history, but recognizing UX-designer as a profession, and giving it a name and a definition is a more recent phenomenon (see Wikipedia).

Over the past five to ten years, I have become increasingly embedded in the domains of creative communities and the smart society. I have met many people who confirmed that they are missing the right vocabulary to describe the initiatives they are involved in and the professions they occupy. For example, in a recent meeting with Zlin Creative Cluster, one of the first things they mentioned was they were “not actually a cluster.” And they agreed that they lacked the ideal definition of what they really were.

In this blog I will therefore give a few definitions for some new terms related to creative communities and smart societies. Most of them came about during the numerous meetings and brainstorms related to the Creative Ring and Creative Ring Eindhoven initiatives I am involved in. So, while I am perhaps amongst the first to define them in a public medium, I cannot stress enough that they would not have originated without the collective intelligence of everyone involved. And specifically, I want to credit CeesJan Mol, as he has been the constant factor throughout this process and, for most of the new vocabulary I will describe, I cannot even remember if it was him or I who came up with it.

Before getting to the new vocabulary we ‘invented’ ourselves, let me first refer to two already existing definitions that are already out there: smart society and creative community.

In Towards a smart society, Charles Levy and David Wong define a smart society as: “One that successfully harnesses the potential of digital technology and connected devices and the use of digital networks to improve people’s lives.”

In The Creative Community, JohnM. Eger defines a creative community as: ’One that exploits the vital linkages between art, culture and commerce, and in the process consciously invests in human and financial resources to prepare its citizens to meet the challenges of the rapidly evolving post-industrial, knowledge-based economy and society’.

I feel that it is necessary to refer to these, since they clearly stipulate two factors that are at the basis of the context in which I want people to use this new vocabulary:

Now let us take a look at the new terms I want to present within this specific context.

Definition: Any multi-stakeholder organization or long-term initiative that – in the context of smart societies – activates collaborations and interactions within and between creative communities. 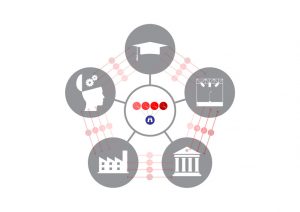 Within this definition, Zlin Creative Cluster comes very close to what a ‘Creative Community Collider’ might be. They have stakeholders from academia, industry, and government. And, although it is not clearly mentioned as such in their online vision, they frame their activities in the pursuit of a sustainable society for their city and region. When I suggested the term Creative Community Collider, they latched onto it saying that they might definitely use it in the future to explain how they bring together members from municipality, creative industry and others. So, I hereby invite them – and others – to start doing so.

The term was coined when we were trying to define the aim of the Creative Ring Eindhoven. We made an analogy with the Large Hadron Collider (CERN, Geneva), where energy is released and ‘new universes’ created when individual particles moving at high speeds collide with each other.

In Creative Community Colliders, we also observe people coming together that move at incredible speed in their own domain (being an entrepreneur, engineer, designer, student, policy maker…) and who generate a lot of positive energy and new insights when they ‘collide’ with each other.

Taking the analogy a step further, the Large Hadron Collider is also a controlled environment where these collisions can be safely created and studied to gain new insights about the whole of the universe. This is also true for Creative Community Colliders: they are environments where we can experiment with new models for creative communities and smart societies. Bringing organizations together in a controlled environment where ‘organized serendipity’ maximizes the chance of a ‘collision’. But the true magic will always happen in the society itself.

On a final note about Creative Community Colliders, take a look at the picture below and this Phys.org article on social networks. 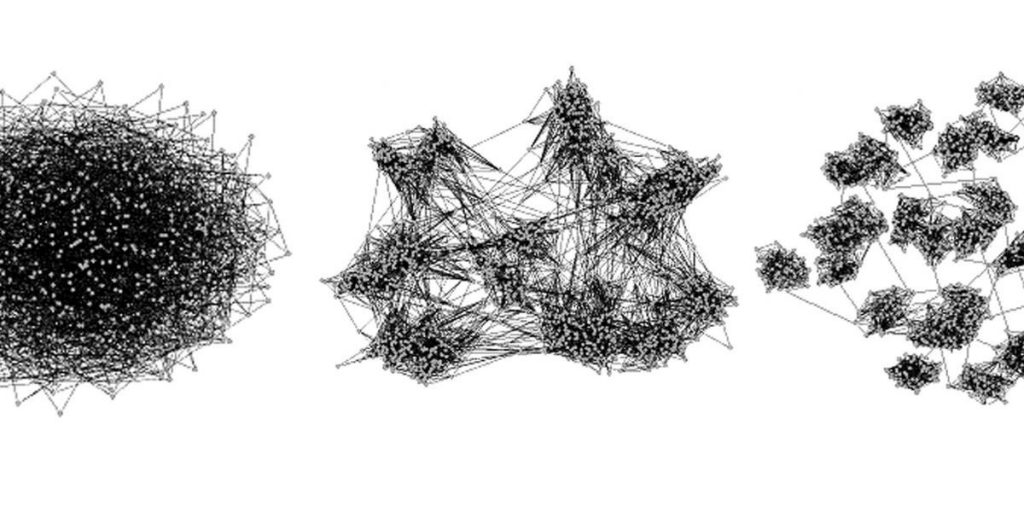 I quote: “In this study, the University of Pennsylvania’s Damon Centola shows that networks that are very diffuse (left) make it hard for ideas to catch on, while networks with very strong group boundaries (right) make it almost impossible for ideas to spread. A network that was moderately “grouped,” however, was most conducive to spreading complex ideas.”

I believe the conclusions also hold true for Creative Community Colliders. To be effective, they should not aim to break down specialties or silos, but act as connectors between them. At the same time, it illustrates to me that a ‘silo’ cannot reach the same effect by unilaterally reaching out to others. In the domain of smart societies, we have to “meet in the middle”. For a long time, I had difficulties expressing the ‘topology’ of a Creative Comunity Collider. Since I saw this study, it gives me a clear reference that Creative Community Colliders are the ones having the specialism about the interconnections between ‘silos’. 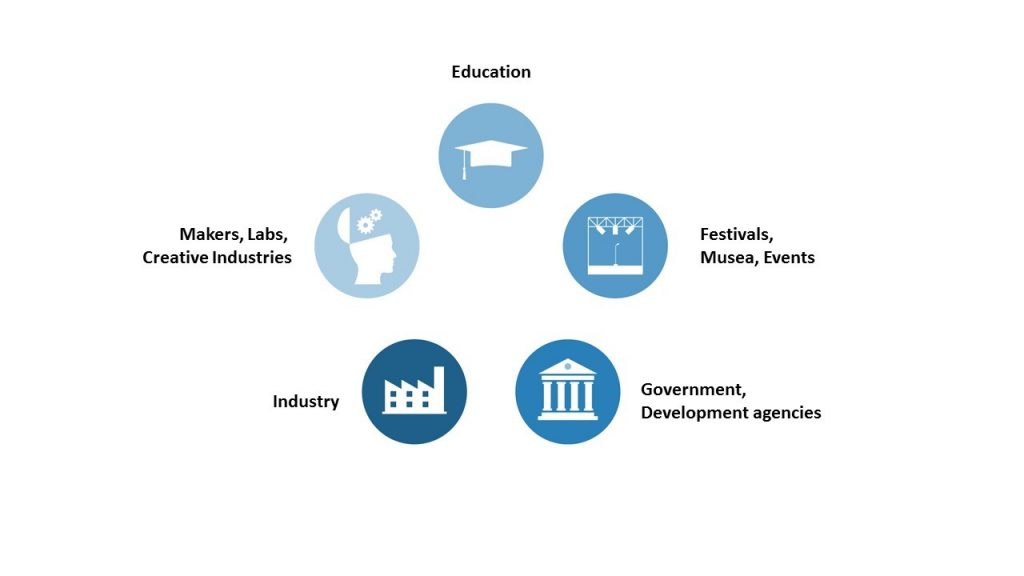 Creative communities from a variety of sectors as defined within the context of Creative Ring. A more accurate visualization, would be to superimpose the middle drawing by Centola on top of it.

Definition: A mechanism within a Creative Community Collider that helps innovative projects reach their goals in a more efficient and effective way. For example, by offering them access to relevant pathways, coaching, spaces, tools &equipment, and grants & open calls.

As an example, one could take the ongoing EU-funded WEAR Sustain program. In this program, Artists and Designers who collaborate with technologists can get a grant to develop ethical and sustainable Wearables. Within this grant, they are steered towards coaches and hubs who can give them access to the support they need to move forward. 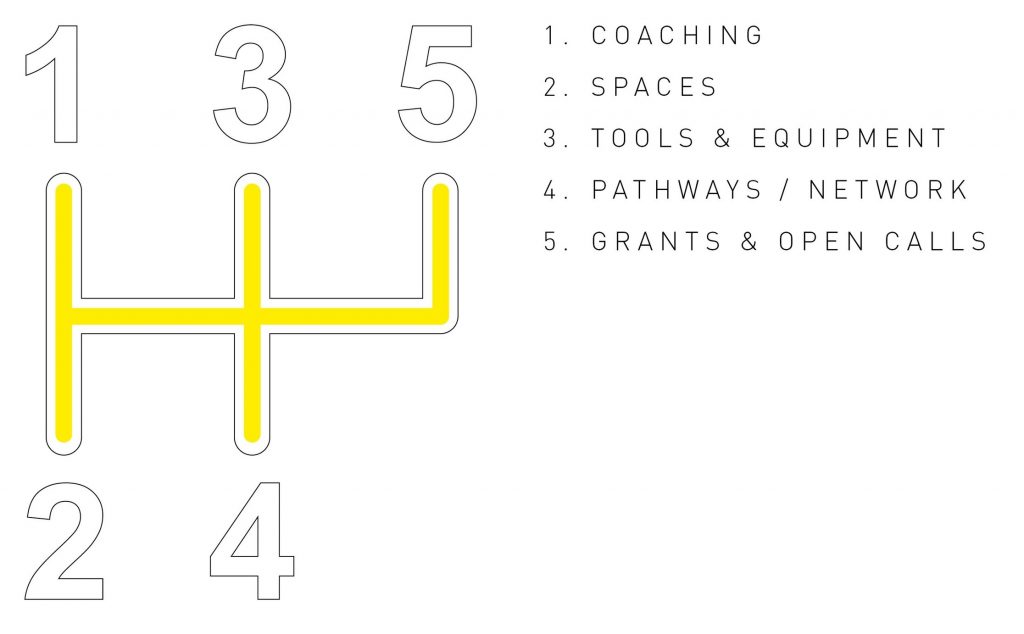 While defining our own Gearbox at Creative Ring Eindhoven, we initially played around with the term ‘accelerator’. We quickly realized that the term ‘accelerator’ – which has largely been claimed in the context of startups – has a much narrower definition, i.e. to help those startups get their company up and running with business plans, etc. to reach that initial funding goal.

In contrast, a gearbox recognizes a broad set of outputs/goals as equally relevant. A gearbox can also benefit projects with goals other than startup ambitions. For example, (artistic) research projects, community- and social-innovation initiatives, student and graduation projects, smart society projects and more. In the example of WEAR Sustain, it also not uniquely supports projects with startup ambitions, but also materials development, open source products and installations for awareness creation, etc.

Also, unlike ‘accelerator’ programs, the goal of the gearbox is not necessarily to put you into top gear but to put you in the right gear for the goal you want to reach. For some initiatives staying in first gear might well be the best approach.

Definition: A person who is (professionally) active in creating contexts where “creative community colliders” and “gearboxes” can arise or in organizing the activities and collisions within them.

This one came about because I didn’t have a job title for my current role. I have worked for many years in the high-tech sector, but I am not an engineer. I worked in marketing communications, but I lack the diploma to call myself a communication specialist. I worked with creatives, but I am not creative designer or artist. I fall somewhere in the middle and have often been called a bridge-builder or connector. But neither of these terms felt right. They didn’t quite fit, or as we would say in Dutch: ‘de vlag dekte de lading niet’.

I needed a new title that defined what I did. And it’s not just me. Many of the people I work with and meet are also collision makers. And, while I can obviously not force them, I warmly welcome them to start using this term and create recognition for our profession.

Definition: A pathway is a connection or series of connections laid within the context of Creative Community Colliders with a specific direction or outcome and with a feeling of co-ownership by the person or organization laying it out.

This may seem simple, but the outcome is significant. There is a certain quality and responsibility to a pathway. I can connect two people who have a similar goal in mind but if I put them on a pathway, I have a responsibility to make sure they reach the desired outcome.

Effectively, I am the ‘catalyst’ in the process, so play a real role in the journey and can have a lasting impact on the other players. This also means that I will develop strong and lasting relationships with the people I put on the pathway, rather than just being the person that made the initial connection.

Also, much like the metabolic pathways I talked about in a previous blog, a pathway can be a series of steps, for example from an initial idea to its final execution. A package of interactions, if you will, that Collision Makers (or is this an already emerging specialty for “Pathfinders”) can help to define and lay out as well as acting as the catalyst at each stage to help deliver the desired outcome.

With these new terms, it is my hope that people will have a better understanding of the processes, roles and organizations involved in creative communities and smart societies. I hope that people will start using them and use them in the right context. Overuse and abuse of terms like ‘sustainability’ or ‘open innovation’ have diminished their value and meaning, so I hope we can use these new terms and others that we come up with, with care and respect.

A new word for collaboration

I also have a question to ask you. Both in creative communities and smart society initiatives, we talk a lot about collaboration and partnerships. UNESCO has even defined revitalizing the global partnership for sustainable development as one of its 17 goals to transform the world. And PwC presented this view of the changing role of collaboration on p.6 of this EU policy document ‘Blueprint for cities and regions as launch pads for digital transformation’ (pdf).

However, I feel ‘collaboration’ is not exactly the right word for the much deeper and long-lasting relationship that is developed when people work together in creative communities. As Julie Vandenbroucke from Arteconomy once summarized it, “Our journey and strong bonds are as important as the goal of our collaboration itself.”

This shift from collaboration to connection is a key aspect of the new way of working within Creative Community Colliders and a new word for collaboration should reflect this. I would be very enthusiastic to hear your ideas.

Three lessons for post-COVID from my mother’s stories
June 26, 2020

How ready is your idea? The end-user readiness level
February 6, 2020

How to make successful collisions
April 29, 2019

Six books you don’t want to wait to see in the movies
December 18, 2018
Recent Posts
Go to Top