Aiming for the bottom right and how to get there

Governing economic paradigms depict that every business needs to grow. Therefore, entrepreneurs and marketeers have an almost religious zeal for graphs and charts that climb towards the upper right corner of a page or screen. After all, if we are visually imprinted with the desired direction, our behavior is more likely to automatically follow. And it does…

While many of you will already be aware of the UN Sustainable Development Goals, a less-well known chart from the WWF, originally published in the 2006 Living Planet Report, provides a single, powerful, and insightful summary of the challenge we face. Horizontally, it plots the Human Development Index of each country as a measure of prosperity and social sustainability. Vertically, it measures the ecological footprint as an indicator of ecological durability. 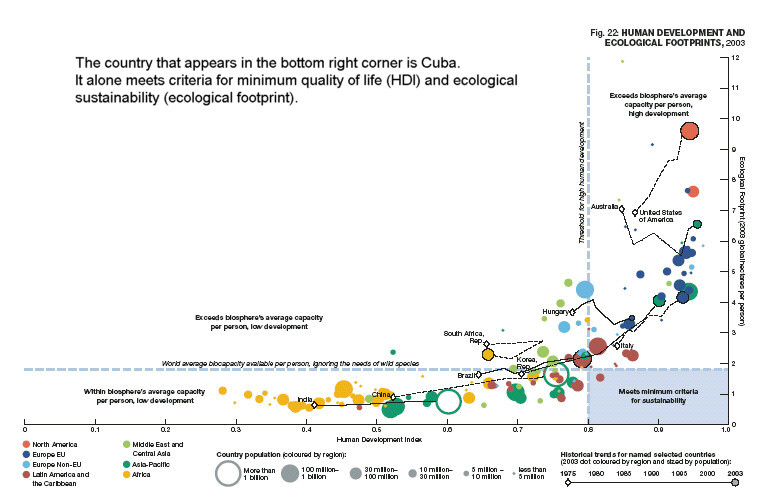 WWF graph illustrating the need to drastically change our approach towards Human development. If we want to secure a future on our planet, we should all end up in the bottom right area. (©WWF Living Planet Report 2006)

What the graph clearly shows is that as countries become more prosperous, they also tend to have a larger ecological footprint. The US is leading the North American continent way up on the right with other countries and continents following in that direction. In view of the economic need to grow mentioned above, it is no surprise that also here we are all heading towards the top right. But, how can we maintain prosperity while preserving biodiversity and ensuring the long-term survival of our planet?

[And experience has shown me that I need to repeat part of that sentence for the economically-focused audience to avoid losing them this early in the discussion: “… how can we maintain prosperity, while…”. Let me be clear: there is nothing wrong with making money. On the contrary, I am not advocating that the solutions or labor must come for free.]

This being said, in my opinion the 21st century has just one challenge: to get to the bottom right of the graph.

This will not be a simple task. Radical changes that question the foundations of some of our most widely accepted paradigms never are. But the good thing is: we know it can be done. There are already some possible ways forward. For example, the Australian research project Visions and Pathways 2040, has developed visions for innovations and policy pathways for transforming Australian cities to achieve rapid decarbonization and increased resilience in the face of climate change. Its final report defines four different scenarios for high-, medium- and low-density populations to reach a low carbon footprint. This is just one example. (I have heard that the EU also has some interesting study material that is mostly collecting dust online). So we have plenty of material to work with. Now we just need the right people and the right framework and methodologies.

Finding and bringing together the right people is critical to the successful implementation of these new ways of living. The UN understood this as its 17th goal for sustainable development is Partnerships. But for these to work, I believe that there also a need for new types of partnerships that cross the boundaries between artistic and technical creatives, and private and public-sector organisations.

This need is confirmed by a 2016 study by Nesta – The Fusion Effect: The economic returns to combining arts and science skills, which concludes that businesses who incorporate scientific and artistic methods in their daily processes show almost ten percent higher growth rates. More importantly, since we were questioning the importance of growth, these businesses were shown to be more likely to bring radical innovations to market than science-only firms.

As described in one of my earlier posts, cooperation between creatives from science and art backgrounds currently still tends to stay on well-walked paths and traditional methods. Very generally speaking, this means that artists and designers talk about ‘the value of the process’, while science and business focus on the ‘IP and KPIs ‘ of the product. Designers brainstorm and prototype, scientists write papers and present at conferences. When they meet, too often there is still confusion instead of radical innovation. And at policy level, the dialogue is often dominated by (re-)framing the problem rather than working on executable and transferrable solutions.

So, we need a better approach, a new type of collaboration. In the last ten years, I have been searching for, and developing, some of the knowledge and methods to make these unconventional, but essential, meetings fruitful. I have had the privilege of seeing a large number of successful collaborations and have been involved in several of them. Recently, I discovered the perfect description for the type of collaboration that brings these creatives together: ‘passion-based co-creation’. I can’t take credit for it as it comes from a book published by Aalto Design Factory and co-authored by the global Design Factory Network. This book gives the best description I have seen to date on the new frameworks we need that will enable us to have the type of collaborations that will lead us to the bottom right corner rather than the top-right. 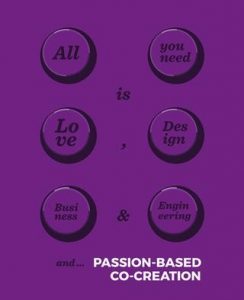 And although the basic concept the book describes might seem a simple and universal truth – ‘People are most motivated and happy when they are working on things that they like to do’ – the set of rules needed to make it happen are not. To quote just one passage (p.19): “Formal cooperation or coordination is not sufficient. Rather, all of the involved stakeholders are perceived as equal, in contrast to the asymmetrical settings in many well-established collaborative development approaches. […] Co-creation aims for working together towards a mutually desired goal on more equal terms.”

I highly recommend everyone to read at least the first chapter of the book and do a thorough and honest self-assessment based on the starting points defined there. Whoever then still thinks this new way of collaborating is easy, please reach out to me and to each other. Because then, working together, we might be able to solve that one big challenge.

Three lessons for post-COVID from my mother’s stories
June 26, 2020

How ready is your idea? The end-user readiness level
February 6, 2020

How to make successful collisions
April 29, 2019

Six books you don’t want to wait to see in the movies
December 18, 2018
Recent Posts
Go to Top